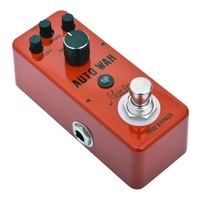 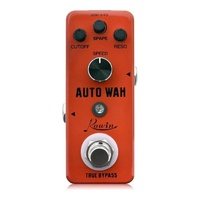 Make 4 interest-free payments of $22.49 fortnightly and receive your order now.

Rowin LEF-3804 Auto Wah Guitar Effect Pedal The Rowin Auto Wah Pedal emulates several versions of wah tones and sounds. Initially made famous by players like Jimi Hendrix, the "Wah-wah" sound effect came to define the sound of rock and funk guitarists in the late 60's and 70's. Now, this sound can be produced automatically, by using the smaller Auto-wah pedals, that allow the player to create their own style of wah, or use the pedal's fixed wah tone, all from this small, compact pedal.

Replicate Classic Wah Tones The Rowin Auto Wah lets the player replicate some classic wah tones with a push of the switch and a turn of the parameter controls. From a subtle, soft, prolonged wah, through to the faster, more accentuated cry baby style wah, the Rowin Auto-Wah pedal gives the player total control. For those less particular, click on the auto function for a set mid style wah that produces a clean, even and well articulated wah sound without any need to adjust parameters.

Compact / Miniature Case Size Advances in circuitry design have made is possible for guitar effect pedals to be built in compact enclosures that literally fit in the palm of the hand. The mini design allows more pedals to fit on a pedalboard and helps reduce the overall weight, making them an ideal solution for the traveling guitarist.

Store Function with Soft Touch Switching Rowin digital effects pedals feature a built-in store function, to quickly save and recall any configuration of effects you create. Hold down the soft touch switch to save a setting, and double tap the switch to recall. Green and red LED indicator lights determine the currently selected channel, and flash to clearly show when a setting is saved. Recall presets even after the pedal is switched off an unplugged.

True Bypass Circuitry The compact inner circuitry is designed with a 3PDT True Bypass switch ensuring an unaltered tone when the pedal is not engaged. A true bypass switch has the ability perform a true bypass of the internal hardware circuit of the pedal, meaning the signal goes straight from the IN to the OUT.